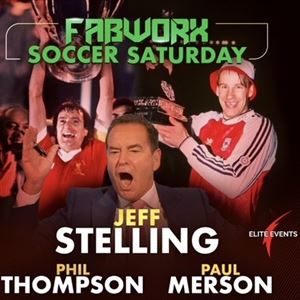 This event is for 18 and over - No refunds will be issued for under 18s.

Elite Events in association with FABWORX UK brings you an evening with special guests the legendary Jeff Stelling, Paul Merson and Phil Thompson.

Jeff will talk you through his glittering career, from where it all started to hosting the world's biggest football show, Gillette Soccer Saturday.

The night will give you a behind the scenes look at what goes on in the studios, with some incredible stories from Jeff who has over 20 years of hosting experience and has worked with some of footballs biggest stars; from George Best, David Beckham and many more.

Paul Merson is an English football television pundit, former professional footballer and manager, and recently one of Harry's Heroes!

After making his debut for Arsenal in the 1986-87 season, Merson went on to play eleven seasons with the North London club. Whilst with the Gunners, Merson was a key player in the club's success, winning the Football League Championship twice, the FA Cup, the Football League Cup and the European Cup Winner's Cup. He went on to play for Middlesbrough and then Aston Villa, where he went on to become club captain and played for the team in the 2000 FA Cup Final, the last to be held at the original Wembley Stadium. In 2002, he signed for second-tier Portsmouth and captained the club to the First Division Championship and promotion to the Premier League. A year later, he returned to the West Midlands with Walsall, where he went on to serve as player-manager.

Merson was capped 21 times for the England national football team and represented the nation at the 1992 UEFA European Championship and the 1998 FIFA World Cup.

Since hanging up his professional football boots, Merson can be found joshing with his 'Soccer Saturday' colleagues as match reporter and regular pundit for Sky Sports, and recently starred in Harry's Heroes: The Full English on ITV. He has been very open about his struggles in the past with alcoholism, gambling and addiction.

We can look forward to an evening of real-life stories from Paul Merson about his life and career. A truly unmissable experience whether you're an ardent football fan or not!

Phil Thompson played as a defender for the Liverpool team of the 1970s and 1980s. During this time, he also represented the England national football team on 42 occasions, and captained England on six occasions. After retiring as a player, he later served Liverpool as assistant manager and, during the 2001-02 season, acted as caretaker for 6 months while manager Gérard Houllier was ill. He was a pundit on Soccer Saturday on Sky Sports for 22 years.

The night will be in two halves; the lads on stage for an hour followed by a live auction and a Q&A with the Audience.